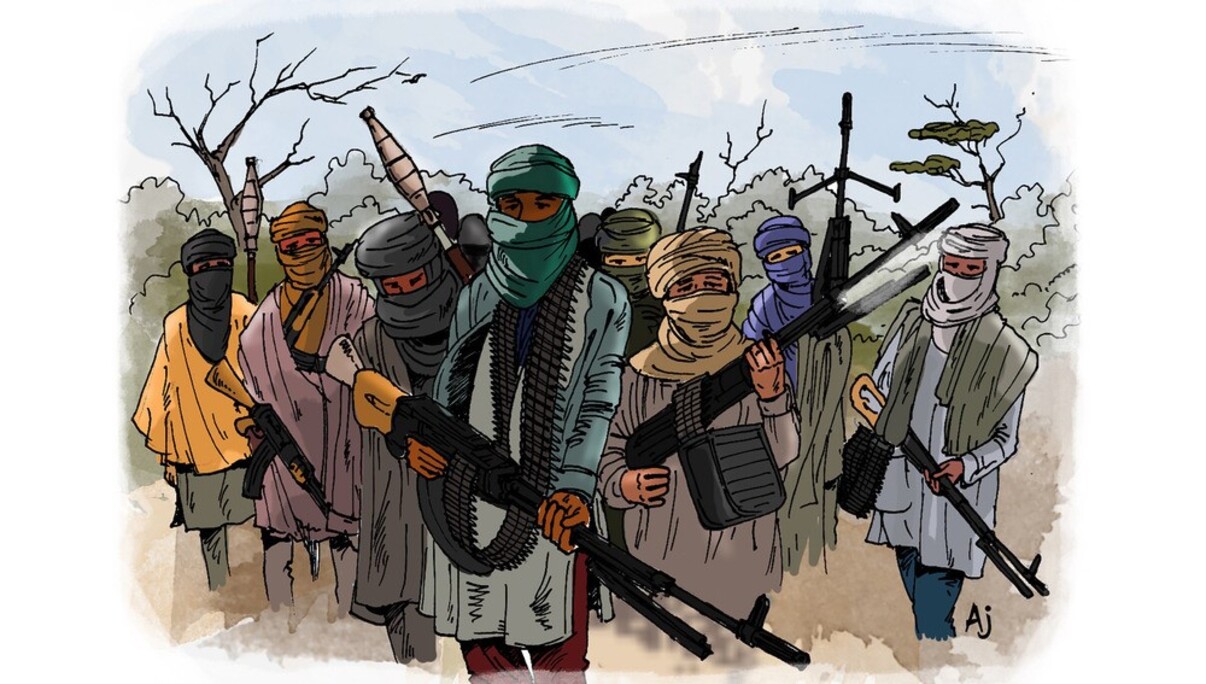 There are a plethora of problems plaguing Nigeria security-wise and banditry in Nigeria is a major one of them. Until recently, states in Northern Nigeria beset by banditry handled the problem as a regional issue.

In the boiling turmoil in the Northwest, which stretches to Niger State in the northcentral, bandits have launched spectacular attacks on military posts and rail lines, as well as collapsing rural communities and attacking motorists on highways, and of course, the recent attempted high-jacking of airplanes.

Overview of Banditry in Nigeria

Banditry in Nigeria is characterized by a swarm of gunmen on motorcycles sweeping into communities, shooting all the people they can locate under the guise of local vigilantes, and then taking off livestock and everything else of worth.

Banditry is a severe crime in Nigeria that jeopardizes democratic administration and peaceful coexistence. Communities in the Northern Nigeria are frequently terrorized by bandits. Kidnapping, arson, shooting, rape, cattle rustling, killing, and looting are among their actions.

The cause and origin of banditry in the country have been a major topic of discussion by many specialists and analysts, with each linking it to different reasons or causes. While some believe that the insurgency can be traced back to the pre-civil war era, birthed and nurtured by violent political actions, crimes, and organized rebellions. Some believe that the origins of the bandit violence can be traced back to the Nigerian herder-farmer struggle. Communities competed ferociously for limited resources due to environmental deterioration and lack of water and fertile land. To some others, unemployment, widespread poverty, and a lack of local authority have resulted in a continual stream of desperate people resorting to criminal behavior to make ends meet.

Despite the fact that bandits aren’t natural ideological bedfellows for jihadist movements, some believe that al-Qaeda-linked Ansaru and Islamic State in West Africa Province (ISWAP) – the country’s largest extremist group after splitting from Boko Haram – are recruiting among them in order to expand their influence across the entire Northern Nigeria.

Meanwhile, according to research by a group of security specialists, the rural banditry and terrorism plaguing Nigeria’s northern regions are the result of a flawed criminal justice system, ethnic profiling, and criminality fueled by poverty. CDD, the Centre for Democracy and Development in West Africa, identified the primary actors and drivers of violent crime in the region, which has killed over 12,000 people and displaced over one million people.

Even though there have been intense arguments over the bandits’ intentions and agenda, CDD refutes claims that the violent merchants are backed by Boko Haram insurgents in the northeast, political actors, Fulani extremists, or foreign forces. Yet, the concerns of banditry in Nigeria are on the rise given their recent escalated activities in the Northern part of the country. 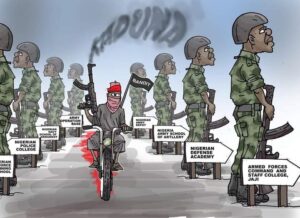 Governmental and military intervention in bandits’ activities in Northern Nigeria has been the major bone of contention. According to multiple sources, the persistent bandits’ invasion in the North dated as far back as 2011, but the federal government only declared them as terrorists in January 2022, 11 years later.

The federal government’s decision to approach the court to declare bandits as terrorists was birthed by repeated appeals from Nigerians, hoping it would enable the government to effectively combat the insurgent. Yet, roughly ten military operations have so far been initiated against the insurgent group in the northwest, including ‘Operations Puff Adder’, ‘Diran Mikiya’, ‘Sharan Daji’, ‘Hadarin Daji’, ‘Thunder Strike’, and ‘Exercise Harbin Kunama III’, which have failed to make much of a dent in the insecurity.

According to experts, the root cause of these is because Nigeria is under-policed, forcing the farmers to turn to vigilantes known as Yan Sakai for protection. The Yan Sakai, on the other hand, have been indiscriminate in their retaliation assaults, focusing mainly on repelling the attacks of Fulani herdsmen.

Socio-economic Effects of Banditry in Nigeria

Banditry has had a negative impact on the country’s economic and social growth. It has shifted economic operations, distorted workplace harmony, hampered individual economic investment, and resulted in excessive government expenditure on security problems since ransom payments for the release of kidnap victims often hurt both the state and home economies.

Due to the increasing activities of these insurgents, the country’s degree of insecurity remains high, causing Nigeria to continually rank low on the Global Peace Index (GPI, 2021). This indicates that the country’s security situation has deteriorated in recent years.

As a result, Nigeria’s economic rating has been largely impacted, with an increase in spending on military hardware as well as procurement of equipment for other security outfits. More so, a lot has been spent on their training to make them more efficient in dealing with insurgent phenomena and ensuring the country’s economic growth’s sustainability.

Nigeria’s capital imports report for the second and third quarters of 2021 was just released by the National Bureau of Statistics (NBS). According to the data, the country got $875.62 million in foreign inflows in Q2 2021, a considerable decrease year over year.

Away from the collapsed economy, banditry has caused untold poverty in the north. According to a report by PremiumTimes in April on the effects of banditry on the lives of poor and average people living in the North, it was almost impossible for the majority of the residents to eat twice a day.

Mohammed Babangida, who was narrating the pains of a 29-year-old Saratu Lawal, wrote ‘“If you’re alive, God will give you a way out of every problem. We eat but not every day and we’re not even sure of where it will come from. But we eat,” she said, the crusty smiles that lingered on her lips as a reluctant apprentice.’ This and many more similar occurrences birthed out of bandits’ insurgencies in the north.

Meanwhile, hundreds of people have been killed as a result of this expanding menace. Several children have been orphaned, and women have become widows overnight, while food insecurity and humanitarian disaster will make life much more difficult for many Nigerians.

Over 8000 people have been killed in Zamfara alone in the last decade, with 200,000 people internally displaced and others fleeing to neighboring states. The incessant recurrence of bandits’ terror made the Sultan and religious leader of Sokoto, Muhammadu Sa ad Abubakar comment that “bandits now go with AK47 in the north and bemoan the region’s worst”.

The actions of these bandits have interrupted farming, which is the area’s main source of income. These invaders often destroy crops and sack agricultural villages. Before those who are fortunate can cultivate, the bandits demand that they pay levies. Those who refused to pay the levy or were unable to do so on time were either slaughtered or prohibited from harvesting their crops.

According to the International Office on Migration, the bandit situation in the northwest displaced 695,914 people between 2011 and 2021.

Major Controversies on Banditry in Nigeria

Since the country’s declaration of independence, successive administrations have had to deal with variations of these patterns. Over time, there appears to be a correlation between bad governance, its failures, and banditry. There have been several misconceptions and controversies surrounding the origin, mission, objectives of banditry, and of course, the persistency of their activities in Northern Nigeria.

According to many, banditry began as farmer-herder conflicts and escalated into cattle rustling before outlaws gained the confidence to invade communities with small weaponry. But in the actual sense, it’s beyond that. While the objectives of banditry are unknown, the origin goes far back to the pre-civil war, according to experts.

Stephen Ellis traced post-independence banditry in Nigeria to “shortly before the civil war when the government broke down in some parts of the Western Region and there was a blurred line between political violence, crime, and organized insurgency” in his book This Present Darkness, a history of organized crime in Nigeria. According to him, Gowon’s military administration failed to manage demobilization at the end of the war. Outlawry grew enticing when demobilized warriors returned home with nothing to do.

The northern region’s instability has been exacerbated by widespread chronic poverty, illiteracy, large underdeveloped spaces, and porous borders with the Niger Republic.

In a report by the West Africa Network of Peacebuilding (WANEP) and ICR, armed bandits were responsible for 1,075 killings in the nation from January to December 2019, which is far more than 702 deaths caused by Boko Haram insurgents. Furthermore, a committee set up to investigate the threat of armed banditry in Zamfara State, led by a former Inspector General of Police, Mohammed Abubakar, reported that between June 2011 and May 2019, armed banditry left 4,983 women widowed, 25,050 children orphaned, and over 190,000 people displaced in the state.

Over 2,000 people have been killed, 500 towns have been destroyed, and over 33,000 people have been displaced as a result of armed bandits’ actions in Katsina, President Muhammadu Buhari’s home state. According to estimates from the State Emergency Management Authority, additional 4,000 persons were internally displaced in Niger State’s Shiroro Local Government Area (LGA) in November 2019.

Although the number is not clear, as of April 2022, no fewer than five hundred persons have been killed by these insurgents, with another hundred injured, while more than a hundred others have been victims of kidnapping in more than 13 attacks within the first quarter of the year.

Because the Nigerian state defines peace as the absence of overt violence and hostility, armed banditry in the North-West will continue to thrive. It refuses to understand people’s suffering and structural disparities as not just a kind of violence, but also a key motivator of violent conflict.

To combat banditry, Nigerian security services must abandon their long-standing strategy of battling with more force and instead focus on creating trust with populations vulnerable to bandit assaults. Working with vigilantes and community leaders on the ground, they should put up early warning and reaction systems, experts suggest.

Also, illiteracy is a major root cause of violence and involvement in criminal acts. As evident, the level of illiteracy in Northern Nigeria is considerably high. Thus, the government should work toward improving the level and standard of education in the affected areas.

Furthermore, public awareness programs should be established in the northern states. The government should design a synergic strategy between security forces and local enforcement, develop suitable punishments for those caught in illegal actions, design a working citizens’ database through the National Identification Card registration and implement NIN-SIM linkage to trace the perpetrators, generate more employment, and reduce the state’s poverty rate.

Lastly, the government should focus on developing the vast vacant land in northern Nigeria as this provides enough cover and hideouts for these terrorists. As evident, each of Sokoto, Katsina, and Niger states, for example, are larger than three southwestern states combined. Unfortunately, the larger percentage of this landmass is undeveloped giving a perfect cover for bandits.

In truth, the activities of the bandit insurgents have escalated in recent times, resulting in persistent attacks that end up leaving scores dead and several others injured. Armed bandits have been attacking the country’s North-West area for more than two years, mainly in Zamfara, Katsina, Kaduna, Niger, and Sokoto states. Armed banditry in Nigeria’s North-West area is fueled by a complex set of overlapping variables, including cattle rustling, the growth of small guns and light weapons, illicit artisanal mining, youth unemployment, poverty, and inequality in the region.

While there’s an imminent need for the intensification of military efforts in the affected states, the government should also focus on reducing the variables that are responsible for these illicit acts. Education, job creation, civil orientation, developing the abandoned landmass, and collaboration with local securities and vigilantes are all necessary in combating banditry in the northern part of Nigeria.