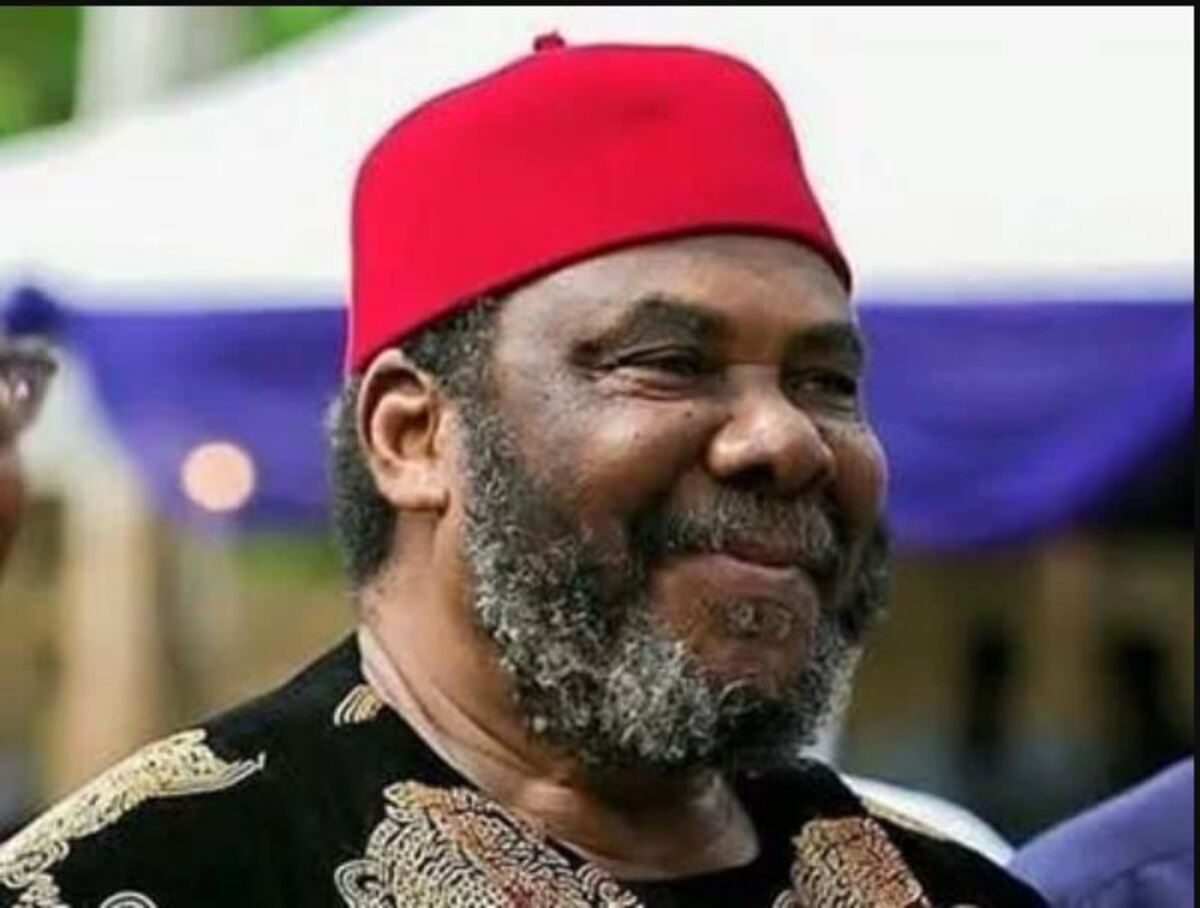 In this article, we will explore everything you need to know about Pete Edochie, a veteran actor and one of the most successful actors in Nollywood with a net worth of $3.8 million.

He proceeded to St. John’s college for his secondary education where he obtained his Senior School Certificate. During his days at St. John’s college, Pete discovered his passion for acting and did not miss participating in most of the school’s dramatic activities.

Similar to his contemporaries in the 1960s and 70s, Pete Edochie did not consider it necessary to acquire a university education before pursuing his career. However, he grew a quest for higher academic qualifications after he had already commenced working. He furthered his studies at the School of Journalism and Television in England. Pete also completed a number of courses abroad before he returned to Nigeria.

Pete Edochie started his acting career in the 1980s with the movie Things Fall Apart, an adaptation of Chinua Achebe’s best-selling novel wherein he played the character of Okonkwo. A combination of all his endeavors in the entertainment industry and a few other businesses helped him to his impressive net worth.

The 75-year-old phenomenal actor has remarkably remained consistent and relevant in his career that has spanned more than 4 decades, appearing in blockbuster movies. However, his life achievements are not only portrayed in movie roles. The Enugu State-born was a broadcaster before he ventured into acting. He has been rewarded with several awards for his impressive contributions to the industry which cannot go unnoticed.

Asides from acting, Pete has also proven to be versatile in the entertainment industry by venturing into music. In 2019, he released an album titled “Pete Edochie”. The English album directed by Ziadda, Dj Trish contains only one song. Also, Nigerian artist, Larry Gaaga featured him alongside Phyno, Theresa Onuoha, and Flavour in his famous song Egedege released in 2021. The song gained massive attention and thus, launched the actor to another level of fame.

Egedege is one of the Igbo traditional Royal-styled cultural dances in South-Eastern Nigeria. In the epilogue, Pete Edochie is seen using the Igbo language to speak about Theresa Onuorah. The legendary actor’s presence in Egedege alongside other music stars helped the song become very successful and as well gained massive recognition. With all these, you can now see how Pete Edochie’s net worth is estimated at a deserving $3.8 million.

When is Pete Edochie Birthday ?

Pete was born on the 7th day of March 1947 in Enugu State located in the eastern part of Nigeria. He is currently 75 years old. His father and mother got married at the age of 40 and 15 respectively. He is from a family of 12, including parents and 10 children; 7 sons and 3 daughters.

There are not many details about his parents but there is information that his father died at age 96. Pete grew up alongside one of his brothers named Tony. Tony Edochie is the husband of Nollywood actress, Rita Edochie.

Where is Pete Edochie From?

Born in Enugu State notwithstanding, Pete Edochie originally hails from Nteje in Oyi Local Government Area of Anambra State. Nteje is a descendant of the Igbo people of Nigeria. According to records, Pete spent his formative years both in the eastern and northern parts of Nigeria. His parents are devout Catholics and trained their children in the Catholic faith and he also followed in the same footsteps.

During his days at ABS, Pete was called up for his role in Things Fall Apart. The 1980 TV drama was an adaptation of Chinua Achebe’s prose of the same name. In the drama, Pete played the character of Okonkwo, aka Ebubedike, a son of the soil who played an outstanding role in resisting British imperialism. His performance in the movie was highly admired and acclaimed, and thus, did well in bringing him to prominence. The movie brought him to the limelight and made him a household name.

He became a star and his name was on the lips of all Nigerians, as well as across other countries. The success of the movie made the world-famous media outlet, British Broadcasting Corporation (BBC) come down to Nigeria just to interview the actor about his role in the drama. It also earned him an international award. Just after he hit the limelight through the TV drama, Pete Edochie started bagging more prestigious roles in the industry.

Before the advent of the film Living in Bondage, Pete Edochie has already been established in the Nigerian home video industry now known as Nollywood. So, he surfaced as an accomplished actor in Nollywood. Pete Edochie has appeared in over 200 movies in Nigeria. Below are some of the movies that earned him massive recognition and boosted his income, given how successful they were upon release.

Lionheart is a 2018 movie that made massive sales upon release. The movie portrays the story of Adeze Obiagu (Genevieve Nnaji) who wants to take over the company of her father Chief Ernest Obiagu (Pete Edochie) when he could no longer run it due to his poor health condition. Despite many challenges she faced, Adaeze was able to stand strong in saving the company from debt, as well as a takeover threat by businessman Igwe Pascal (Kanayo O. Kanayo)

According to a top Nollywood insider, online streaming giant, Netflix paid a whopping $3.8 million to acquire Lionheart. The film gathered over ₦9 billion in domestic gross, making it to the list of highest-grossing Nigerian films. It went ahead to get many favorable acclaims from critics and was described as a “satisfactory story” by Nollywood Post.

Released in 2003, Billionaire Club is one of the movies that contributed to the popularity of the admired actor. The film directed by Afam Okeke tells the story of a secret society of men who makes use of occultic powers in manipulating people to make blood money. Within its few weeks of release, Billionaire Club had already collected ₦50 million. Starring in the movie are Kanayo O. Kanayo, Clem Ohameze, Patience Ozokwor, Sola Sobowale, Tony Umez, alongside Pete Edochie.

In Egg of Life, a chief priestess tries to unravel the mystery behind the death of the king’s (Pete Edochie) only son by sending a group of girls into an evil forest to fetch a magical Egg of Life. The movie was released in 2003 and it got exceptional positive reviews with a box office success of over ₦117 million.

Other Notable Movies of Pete Edochie

Has Pete Edochie Retired From Acting?

Even though it appears that the former journalist has been slowed down a little bit by age, the iconic actor is still active in the movie world. His acting career has spanned over 35 years and he has come to be recognized as one of the most prolific Nigerian actors. In 2018, he graced the screen with a prominent role in Genevieve Nnaji-produced film, Lionheart. His latest role was on the sets of Unroyal (2020), Fatal Arrogance (2020), and Ebubedike in 2021.

Considerably, Pete Edochie has aged but still remains relevant in the movie industry. Since his role in Things Fall Apart, the Nollywood legend has continued to contribute greatly to the growth of the industry and has as well acquired impressive wealth.

Although it is difficult to say exactly how much he receives for his roles in movies, it is not far-fetched that Pete is one of the highest earners in Nollywood. Meanwhile, actors of his ilk are paid millions for movie roles. However, some sources report that he charges nothing less than ₦2 million for a movie alongside a consistent agreement on working terms and conditions that suit his iconoclastic nature. Although his movie appearances have decreased in recent years, his wealth continues to increase.

Living in Darkness, Lion throne, Rituals, Greedy Genius, Last Ofalla, Lion of Africa, Igodo, Evil men, Monkey Chop Banana, 50 days with Christ, Idemili, The Egg, among others are some of his other movies that prove the prowess of this legendary actor. The actor increased his fees as his fame and popularity grew in the industry and today, the film king has found his feet as a successful actor in Nigeria. Meanwhile, the Anambra State native is known for being soft-spoken regardless of his authoritative appearance in most of his movies.