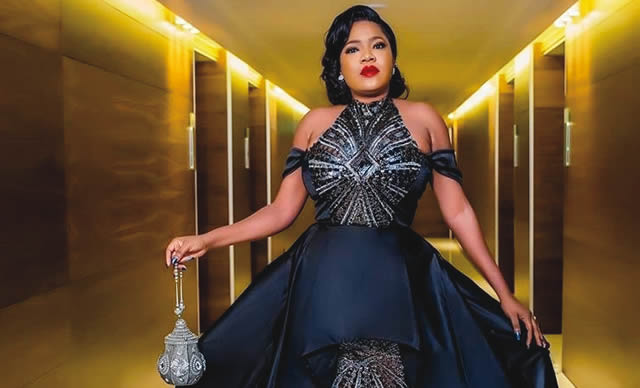 Spread the love
In this article, we are going to explore everything you need to know about Toyin Abraham.

Who is Toyin Abraham?

Toyin Abraham is one of the numerous hardworking individuals and on-screen sweethearts who bring uniqueness and brilliance to the Nigerian film industry (Nollywood) of today. Since her debut in 2003, the 37-year-old Nollywood actress is currently one of the top leading lights, highly-celebrated and well-loved personalities in the industry.

Over the years, she has starred, directed and produced numerous movies, including her popular blockbuster “Fate of Alakada”. From the Yoruba tribe of Nigeria, the veteran actress was previously known as Toyin Aimakhu before having a change of name in 2016. Her skills in delivering on-screen comic roles matches no other and has made her an household name and one of Nollywood’s favourite acts to watch on TV.

Generally, Toyin is known for her comic roles in films especially with her self-produced blockbuster movie Alakada Reloaded. She is also an entrepreneur who recently ventured into the sales of herbal products for women with infertility issues.

Toyin Abraham was born in the southern part of Nigeria in the town of Auchi, Edo State. She however spent her early life in Ibadan, Oyo State in the southwestern Nigeria. She was born into a poor family of six children, with her being the last of them. She once revealed in an interview on how she had to hawk goods in order to support her family’s poor condition. Her father is a retired staff of the Ibru organization, while her mother is a pastor. She had her primary education at Oba Kenzo Primary School, Benin City, Edo State, but unfortunately, she wasn’t able to finish up due to her father’s retirement.

As a result, she moved with her family to Ibadan, and afterwards, she continued her education at Queen’s Staff School. She then had her attended St Anne’s School, Ibadan for her secondary school education. In 2005, after the completion of her WAEC, she was offered admission into the Osun State Polytechnic Iree from 2005 to 2007, where she obtained her Pre-National Diploma, and Ordinary National Diploma. She also obtained a Higher National Diploma (HND) Certificate in Marketing from Ibadan Polytechnic. In a quest for more knowledge, she sponsored herself to Olabisi Olabanjo University, where she bagged a degree in philosophical science.

Toyin Abraham began acting in 2003, but didn’t become a professional on-screen actress until 2004. Her motivation for venturing into the then struggling Nigerian film industry (Nollywood), came as a result of meeting with popular Nigerian actress– Bukky Wright. Toyin was opportuned to meet the actress when she came to Ibadan to film a movie. Since then, she took the ace Nigerian actress (Bukky Wright) as her boss and mentor in the industry.

With the help of Bukky Wright, Toyin first featured in a Bukky Wright–produced film titled “Dugbe Dugbe Nbo”. Her incredible encounter with the actress and act in the film opened way for her to star in films with famous Nigerian actors and this was how her quest to fame and fortune started. Over the years, Toyin Abraham has produced, directed, and starred in several Nigerian films, such as – “Alani Baba Labake” and “Ebimi ni”.

Thanks to her successful acting career, Toyin Abraham was also called upon by politicians to campaign for them (knowing how influential she is). At one of the programs for former Nigerian President Goodluck Jonathan’s re-election bid in 2015, the actress said she was prepared to die for the Peoples Democratic Party (PDP) on whose platform Goodluck Jonathan was contesting.

However, she later came out to apologize to her fans for the comments she made and advised Nigerians not to spill their blood for any politician whatsoever. Martini Animashaun – the CEO of Tinimash Entertainment, created and managed a reality show titled (KUWTA) “Keeping Up With Toyin Aimakhu” in her honour.

Today, Toyin Abraham is one of the biggest brands in the Nigerian movie industry. According to her, starring in Okafor’s Law and working with movie director, Omoni Oboli was highly instrumental to her brand. She is not relenting, she has been consistent and is making a name for herself.

In the industry, she has worked with the likes of Kunle Afolayan, Odunlade Adekola, Femi Adebayo, Muyiwa Ademola, Tonto Dikeh, Jackie Appiah, Bolanle Ninalowo, Mercy Aigbe, Iyabo Ojo, and many others.

Using her huge fame and influence to her advantage, Toyin Abraham has also directed and released numerous movies including the popular Nollywood movie, Fate of Alakada.

In 2013, Toyin tied the knot with fellow Nigerian actor – Adeniyi Johnson. Unfortunately, the marriage only lasted for two years. Then, in July 2019, she had a traditional engagement with Kolawole Ajeyemi, an actor too and together they welcomed their first child in August 2019.

In 2016, she announced and publicized a change of name. She changed her name from Toyin Aimakhu to Toyin Abraham in 2016, and according to Toyin herself, the change was as a result of her family’s decision. Her hobbies include singing, dancing, and cooking.

According to Toyin, as a result of the difficulty she had during child birth and how a lot of people have abandoned the traditional remedies that served their forefathers during crises of childlessness, she decided to launch her very own herbal medicine in 2019. The herbal medicine which has gained so many positive reviews ‘flooding’ all over social media, is thus; to help women to improve sexual health, boost women fertility, balance menstrual cycle and cramps, improve fertility, correct hormonal imbalance, stop symptoms of early menopause, support and stabilize pregnancy and set the body up to becoming a mother.

So, rather than people (mostly the financially unstable ones) choosing they have to sort out other modern inventions which are quite expensive and probably harmful to their health, she legally launched the Female Fertility Booster (FFB), a product that makes child bearing, conceiving and female adult life easier.

As of 2021, Toyin Abraham might not have joined the million-dollar female actress geng in Nigeria, but she’s been able to amass a net worth estimated to be roughly $800,000.